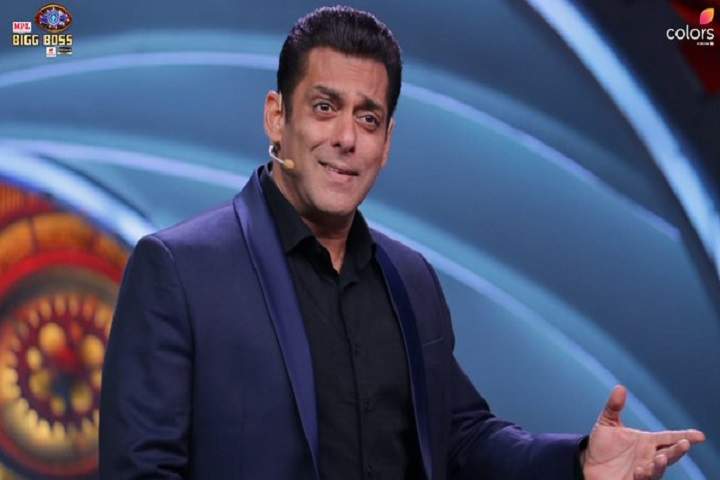 Here is the written update about the premiere episode of Bigg Boss 14 which is telecasting on 3rd October 2020 at 9:00 PM and this season is again hosted by Salman Khan on Colors.

We kick the things off with the one and only Salman Khan getting us welcomed on the show. A great many celebrities appear to be setting in the majority, but not in reality, they used the footage of earlier award shows to ensure an interactive experience for the audienceSalman Khan added up new things by presenting Sidharth Shukla, Gauahar Khan and, Hina Khan as the ruler of the Bigg Boss 14.

Sidharth Shukla, Gauahar Khan and, Hina Khan all three drops their promo. Hina Khan simply commences dancing on "Wakhra Swag". Sidharth Shukla performers on the song "Boss" and directed to the clips of his time in the Bigg Boss 13 house as it plays in the background.

Hina Khan says "she will have all the personal belongings of the contestants for the first 14 days.

Gauahar Khan talks about the most perpetual persona, every new contestant should have with the premiering. She says, "There should be leadership and puts the thought in the clear."

Hina Khan: "They should use their real personality just like she showed up last year."

Sidharth Shukla says, "If he is being honest to himself then it would be the best perspective according to him.

Eijaz Khan has been added as the first contestant for the Bigg Boss 14 premiere. He performs on Knoch-Knock, Tera baap aaya! and then meets Salman Khan on the show.

Nikki Tamboli has been added as the second contestant of the Bigg Boss 14. She dropped the promo just like every contestant does at the start. We cut the promo as Salman Khan beams, Salman puts plenty of batters on Nikki Tamboli. According to her promo, many boys are behind her. So, I have more boys as my friends and therefore girls are jealous of me. I have broken many hearts.

Nikki Tamboli and Eijaz Khan both get engaged in a talk as Salman Khan does offer. Nikki Tamboli will surely rule many hearts during her stay in Bigg Boss 14 house.

Salman Khan says, Eijaz Khan has got a problem with touching, but Nikki Tamboli makes it sure that it will not be preserved from now on. She gets Eijaz Khan into dancing as Eijaz Khan involves too.

Salman Khan now has something special for both the contestant. Salman does test BBQ in order to know how much BBQ do they have? Nikki Tambola wins the BBQ test grabbing the medal in her hand.

Salman Khan asks the seniors to have their selections in results. Nikki Tambola becomes the first to be selected by the seniors. They also go on to select Eijaz Khan as they enter the Bigg Boss House.

😍😍😍😍
Here’s how one could possibly react on the arrival of the ever so stunning, @RubiDilaik, definitely a SHAKTIshali entry inside the house of #BB14. 💪#BiggBoss2020 #BiggBoss14GrandPremiere @BeingSalmanKhan pic.twitter.com/PBDzp6ffVB

One of the journalists puts the first question for Rubina, the question says, you have been a preference of the TV audience but Abhinav you are not that popular among the audience. So will your relationship change because of the competition?"

Rubina says, Their relationship will stay unimpaired as husband and a wife, and then she calls herself as the biggest fan of Abhinav. They also had a great many questions to Abhinav too. Rubina gets rejected as she stays sticky with the punishment given by the Bigg Boss. Although, Seniors selected Abhinav.

Jasmin Bhasin out up next as the promo dorps. She walked out to share the stage with Salman Khan. Jasmin Bhasin makes the fifth official entrant for Bigg Boss 14. Salman Khan and Jasmin Bhasin get engrossed into the BBQ test. Two questions for her, one of them had a math question. Seniors selected her.

Take a look at the promo from Jasmin Bhasin

Back from commercial break as we await Jasmin joins Sidharth Shukla, Gauahar Khan and, Hina Khan. They ask Jasmin multiple questions as well as breaking the boatel if she goes wrong with one of them. They finally let Jasmin be officially in.

Out with Salman Khan on the big stage, he lets out the next contestant of the Bigg Boss 14. The promo happens as Nishant Malkani kicks off his persona to be officially in for the Bigg Boss 14.

Take a look at the full promo.

Salman Khan further went on and concluded that if there is anyone who can contest up with you. The Music hit has the interruption crops up with Shehzad Deol as the next contestant.

They both go through the BBQ test. We wait for the results from the senior's selection but not before a new contestant in the form of Sara Gurpal. She gets the way to the stage with a melodious Panjabi song. Here comes the entering poll dance from Shehzad and Nishant Malkani.

Sara Gurpal was slated to go under the BBQ test. Shehzad Deol stands in the queue with Nikki Tambola, Eijaz Khan, Rubina Dilaik, Abhinav Shukla, and Jasmin. Nishant Malkani and Sara Gurpal fail to pass the BBQ test and they joined Rubina.

Playback singer Jaan Kumar Sanu makes his walk up the stage with a song. He explains his journey to the Bigg Boss 14. Pavitrra Punia does the walk with dance on Tip-Tip Barsa Pani!!!

A voice so soothing that can make any day bright, presenting to you @jaankumarsanu in #BiggBoss14!! 😍#BB14 #BiggBoss14GrandPremiere #BiggBoss2020 @BeingSalmanKhan pic.twitter.com/PhhZbrtIE2

Pavitrra Punia gets selected in the BBQ test followed by a rejection from Jaan Kumar Sanu. Pavitrra Punia officially joins the next tasks by seniors. A couple of blessers walk through the Bigg Boss House.

Indian Singler Rahul Vaidya comes out as the next contestant for the Bigg Boss 14. He says, he has always been offered Big Boss, due to having no time he could not make it here, because now he is free, so he wants to utilize the time.#

For more and the latest news about Bigg Boss 2020, stay tuned to us.