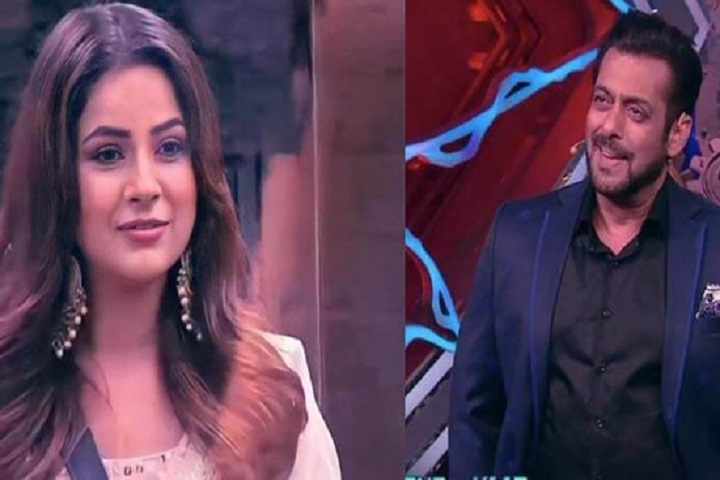 Now, on Sunday's episode, Salman Khan will be reuniting with Shehnaz Kaur Gill who was one of the biggest reasons why Bigg Boss 13 became so popular and became a number one hit show on the television screen. The Punjab Ki Katrina Kaif turns India Ki Shehnaz Gill was even declared as the Queen of hearts and Bigg Boss.

The return of Shehnaz Gill as a guest in the show is surely going to be a blockbuster where the Bigg Boss 13's second runner-up will be seen flirting with host Salman Khan according to a promo released by the channel. Fans have been waiting to see SalNaaz (Salman and Shehnaz) moments for a while now and they are finally going to see one of the most loveable bonds of Bigg Boss history.

In all likelihood, Shehnaz is coming to the show to promote her upcoming music video "Waada Hai" and in a promo, she can be seen in her flavor, asking Salman why he hasn't matched his outfit with her and also told him "I love you..in a positive way". Salman, one of Shahnaz's guiding lights in BB 13, will also be seen having fun with her.

The channel shared the promo and wrote, "I love you, positive wala" @ishehnaaz_gill is back in the @BiggBoss house." Shehnaaz also shared the promo of her appearance in the show and wrote, " It's okay kar diya... #BB14 ke weekend ke Vaar par aa rahi hoon apna swag lekar!".

Soon after the promo aired, the netizens went gaga over it and started trending #SalNaaz on the internet praising the pure bond between Salman Khan and Shehnaaz Gill. Let's see some of the best comments on the #SalNaaz trend.

Awwww this is Moment We arw waiting for M talking about #SalNaaz Moments & They are Trending.
They are So Cute #ShehnaazGill pic.twitter.com/JSHOUbbVWI

Everywhere only Shehnaaz is talking and since Fans found out Shehnaaz has come Big Boss Fans is very happy and waiting for #SalNaaz Moment She is The Real TRP Queen
She Won The Heart ❤️ Again Big Boss Fans:)Gem💎𝙌𝙪𝙖𝙡𝙞𝙩𝙮 𝘽𝙚𝙩𝙩𝙚𝙧 𝙏𝙝𝙖𝙣 𝙌𝙪𝙖𝙣𝙩𝙞𝙩𝙮👑#BiggBoss14 pic.twitter.com/TBYnrBO2HW

All the memories of BB13 have just rushed back! The unfiltered #ShehnaazGill, the cute #SalNaaz banter and the non stop entertainment!

Don’t forget to watch @ishehnaaz_gill on WKW tomorrow at 9:00 p.m. only on Colors TV! pic.twitter.com/r82K9vruCu

That smile on Salman's face while interacting with Shehnaaz.... God the Bubbly Shehnaaz Kaur Gill is back !! She's the SAME ♥️ @ishehnaaz_gill#SalNaaz #BiggBoss14