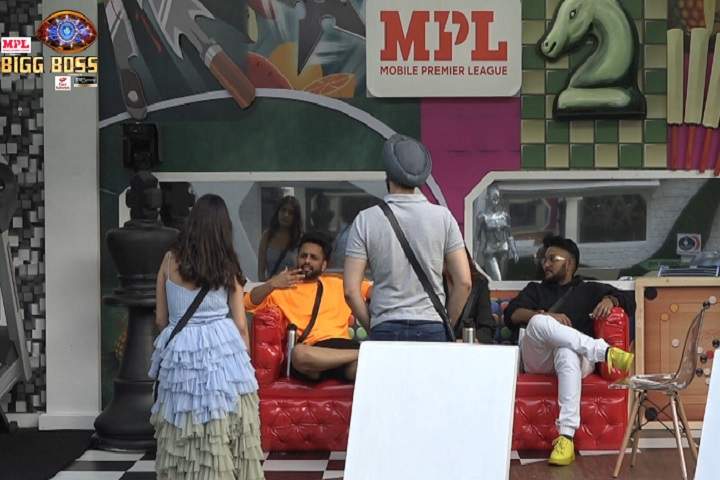 Here is the live update for the Bigg Boss 14, day 6, which is slated to air live on October 9, 2020, Friday at 10.30 pm on Colors. It will be available before TV exclusively on Voot Select.

Yesterday's Sid's Island task continued to take the spotlight throughout the show, especially with rain dace and "Sid's Beach Cafe". Nikki Tamboli was declared as the winner, thus she got immune from elimination. Rubina who was still out with the rejected label was also allowed to be in. But she will not be able to participate in the next Immunity task in return.

In the upcoming episode, Rubin Khan will be seen Infracting Toofani Seniors' Ruling Power as they didn't subtract her to take the things freely.

.@Nikkitamboli and @ashukla09’s immunity will be on the line!
Watch it on #BiggBoss14 tonight at 10:30 PM, only on #Colors.
Catch it before TV on @VootSelect. @BeingSalmanKhan #BB14 #BiggBoss #BiggBoss2020@PlayMPL pic.twitter.com/blyAgotMiL

We kick off the show as Nikki Tamboli and Pavitra continue to beef up with feud over the bedroom. Now, Sara Gurpal goes aggressive on Jaan Kumara Sanu. Deol suggests to Nikki Tamboli that "her every talk is senseless, she is trying to entangle in wrong things. Deol has a suggestion for Jaan that, "He should encourage wrong talks."

A little hot exchange happens between Jaan Kumar Sanu and Deol. Hina Khan and Sidharth do fight in fun Deol and Eijaz Khan are cooking something over seniors' power. Eijaz says, "They are completely getting us, board. He thinks seniors are taking the task of the rest of the family!

It's that time of the day when freshers have to suck their 7 items. Nikki Tamboli and Shehjad Deol once again get into a fight. Meanwhile, Eijaz Khan thinks that If Bigg Boss was international, then these guys would be selected. Shoes are also two different items according to Rubina. Hina Khan Said now Rubina Will also get the same shoe

.@RubiDilaik ke hisaab se shoes bhi hain do alag alag items. What about you? Tell us in the comments below. #BB14 #BiggBoss2020 #BiggBoss14 @BeingSalmanKhan pic.twitter.com/B0K0RBNnOF

Abhinav Shukla tries to explain Rubina Shukla, Seniors Hina Khan, Gauhar Khan & Siddharth Shukla Came to Rubina Angry when he questioned how to count items!. Abinav tells Rubina to short out things, Rubina reaches and tells everyone that she is sacrificing her 7 items for the upcoming week.

Back in the house as Eijaz Khan discusses with Rubina, Rubina just blames seniors that, they are trying to make contestants go against them her.

Fresher will not be allowed to put water on them.

Pavitra is more in forcing Nikki Tamboli, she finally insisted Nikki Tamboli get off the bulldozer. Thus, Pavitra gets immunity.