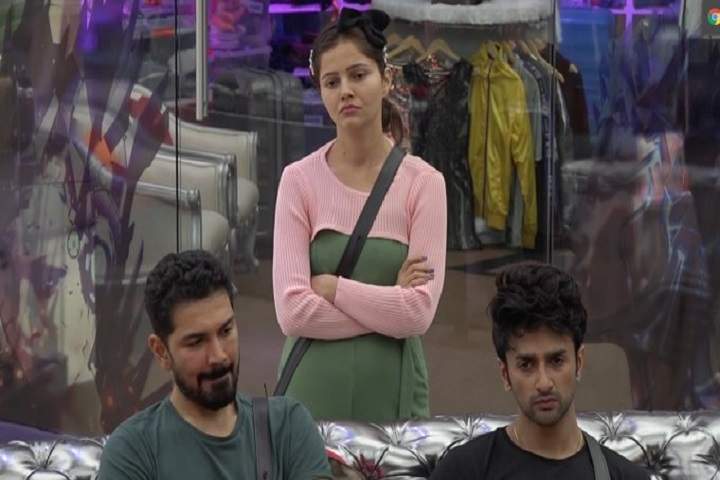 Here is the live update for tonight's Bigg Boss 14, day 4, which is slated to air live on October 7, 2020, Wednesday at 10.30 pm on Colors. It will be available before TV exclusively on Voot Select.

In the upcoming episode of Bigg Boss 14, the girls of the house, Rubina Dilaik, Nikki Tamboli, Jasmin Bhasin, Pavitra Punia will be seen doing a sensuous rain dance with senior Sidharth Shukla.

Plush, the first immunity geter Abhinav Shukla will be dazzled over the decision to sacrifice his immunity in the wake of letting Rubina in the Bigg Boss house who is still out under the task contemplation.

A sneak-peak of tonight's show, Nikki Tamboli says, "Today she is missing her ex-boyfriend and thus wants to wear his t-shirt. Gauhar Khan teases Sidharth by saying that don't you feel anything. Sidharth Shukla calls himself as Nikki's ex-boyfriend.

Nikk Tamboli demands some clothes, but no one agrees on that. Everyone goes against Nikki Tamboli. Jasmin says, "I don't understand why everyone is giving so much attention over Nikki Tamboli."

--Nikki Tamboli has a complaint to the Bigg Boss via camera, She says, "No one has been her genuine friend." Gauhar Khan pleads to Pavitra that, "You should convince Nikki Tamboli." but Pavitra doesn't agree on it.

"Rod is the logic of fool," Pavitra points out this line for Nikki Tamboli. Gauhar Khan wants that, Today food will be available when there are 7 items day. Pavitra meanwhile, says I hope trophy could split into pieces.

---Back from the commercial break, as Hina Khan, declares that right after some time, Siddharth will come and will also ban you from the bedroom. Shehzad Deol slams over Nikki Tamboli and they both broke into a feud. Nishat finally, makes some adjustment with Nikki Tamboli, Nishant gives up things for Nikki.

Sara and Jaan Kumar Sanu stop Nishant from doing that, Sara says, "Tu usko hawa ku de reha h". Nikki Tamboli asks Nishtant that why he is giving up. Now, everyone climbs on Nishant, everyone thinks that Nishant shouldn't give up.

"Food is more important than personal items," says Nishant Singh Malkani. Bigg Boss gathers everyone, Bigg Boss talks about the previous task and then turns on Rubina as a rejected contestant who is still out.

The first immunity geter Abhinav Shukla will be dazzled over the decision to sacrifice his immunity in the wake of letting Rubina in the Bigg Boss house who is still out under the task contemplation. Abhinav Shukla announces that he is not scarifying his immunity.

Bigg Boss says, Rubina has been detected using furniture from the house, Bigg Boss enforce seniors that she should not use the furniture. Rubina doesn't have an agreement on this, she wants proof that when she used furniture.

Nikki Tamboli was still uncompromised on her decision as everyone was after her. Nikki says, "She wants clothes. Jaan Kumar Sanu involves in convincing Nikki, Sara does mimic of Nikki Tamboli.

Finally, Sidharth Shukla goes and explains Nikki Tamboli as she agrees to gives up. Nikki Tamboli says, they can have 7 things. But Pavitra still has some issues with Siddharth Shukla. Gauhar Khan asks Shidhart that what makes him impressed. "Personality, persona and connect," says Siddharth. The First elimination of Bigg Boss 14 will be known as "Sid's Island" which is owned by Sidharth. Sid's Island will follow up three sides including rain dance, Tatoo task and Sid's Beach Cafe. In the first round, girls will get tattooed by Sidharth Shukla. meanwhile, they are seen impressing Sidharth.

Also, note that Gauhar and Hina help to impress Sidharth whosever they want to. Nikki Tamboli has some advice from Hina Khan. Jasmin will smile during tattoo tasks. Pavitrra even kisses Sidharth in order to impress him and gets a tattooed stomach-side instead. Sidharth makes a beautiful rose tattoo for Sara.

Nikki Tamboli says, "In fact, I don't like to get tattooed, but she has especially come for Siddharth. Nikki has her back tattooed with Scorpions. Jasmin next up, Jasmin says, "Are you single." Siddharth replies, "If you want then, I will be single for you." Jasmin blushes while Sidharth Shukla makes a tattoo on her shoulder.

Sidharth passes everyone girls expect Sara as the show goes off the air.

Tomorrow's episode will be followed by a rain dance and Sid's Beach Cafe.

In another task known as "Sid's Beach Cafe". The rules follow every girl contestants will become the waitress of the cafe, they will get a tray full of soft-drink glasses. While Sidharth will work as Bartender who fills all the glasses.

All they have to do is preserve those glasses out of falling, By the end of the day, whoever has the maximum number of filled glasses wins the round. Jasmin says, "I really want to get immuned" the girls are seen strolling around with soft-drink glasses in a tray in the garden area.

Shehzad Deol arrives and shakes Nikki Tamboli's glass, she goes on and drops Pavitra's tray. Pavitra says, "Whoever may have done this, but everyone will sufferer the punishment. She goes and drops Jasmin's tray.

Pavitra and Rahul will also be seen splitting up their friendship.